During the 1940s the hottest outfit for some African American men and teens to wear were zoot suits. It took a lot cloth to make one suit, but the results was a showcase of “look at me” on parade. The fashion phenomenon eventually caught the attention of Latinos and Italians, each having their own versions of the culturally popular suit.


Believe it or not, this flamboyant suit evolved into an object of violence and racism. Those who wore the oversized suits were labeled “zoot suiters”.  The zoot suit, a high fashion tailored wonder, had wide lapels, padded shoulders, tapered cuffs, making the wide legged, high waist trousers resemble a pair of harem pants.  Colors varied according a wearer’s taste. Zoot suits were accented with a single or double chain attached to the pants, hanging the full length of the suit. Wearing shoes shined to the max, some zoot suiters wore wide rim fedoras accented with long feathers. Fashion minded women wore less severe versions of the zoot suit. They wore mid-calf skirts and vests.

In the 1940s Los Angeles was a hot bed of racism, segregation and racial strife. America was thigh high in World War ll.  In 1942, following President Franklin D. Roosevelt’s Executive Order 9066, the U. S. Army evacuated Japanese nationals and U. S. citizens of Japanese descent. In Los Angeles, Little Tokyo disappeared after thousands of Japanese were interned in makeshift concentration camps in America. The Japanese had struck Pearl Harbor, and all Japanese were suddenly the enemy.

In 1943 all hell broke loose on the streets of LA, the city of angels.  It was a time when Mexican Americans were forced into street fights with White Marines and sailors.

“Tensions between servicemen and civilians were on the rise as thousands of military men on leave poured into Los Angeles, seeing the city as a playground for booze, women, and fights. While many civilians tolerated them because of the war effort, others did not. Particularly in the segregated, ethnic enclaves of Los Angeles, unruly servicemen met stiff opposition from young men and women who refused to defer to the presumed prerogatives of white privilege. While white military men and civilian youth of all colors clashed in the streets, confrontations occurred most frequently between white servicemen and Mexican Americans, because they were the largest minority group in Los Angeles.

"White people in general, civic leaders and police departments decided among themselves that zoot suits were un-American and unpatriotic. "In the midst of a global war with an uncertain outcome . . . and calls for patriotic loyalty, minimized public tolerance for expressions of soul difference--even sartorial ones-- the zoot suiter tested the political and moral expectations of the moment." kcet.org quoting from Eric Avila essay.

Whites felt Mexican Americans should have been fighting in the war, not wearing zoot suits and flaunting their racial differences. The fact is Mexican Americans were fighting in World War ll. Racial hatred blinded White people.  The unfortunate internment of  of thousands of Japanese citizens saved them from experiencing the racial acrimony. America was at war with the Japanese for bombing Pearl Harbor.

“Drunken military men on their way back to base after a night of carousing were often ‘rolled’ by civilian minority youth hoping to teach them proper respect. With equal animosity the sailors would often insult Mexican Americans as they traveled through their neighborhood. In the barrios, rumors spread about sailors searching out Mexican American girls.

"On the military bases, stories circulated about the violent reprisals suffered by sailors who dared to date Mexican American females. Sailors complained bitterly about their wives or girlfriends being subjected to the sexual taunts of young Mexican Americans. The tension continued to escalate until a street fight between sailors and Mexican American boys sparked more than a week of fighting in June of 1943 known as the Zoot Suit Riots.” The American Experience, PBS

The media and L. A. police fanned the flames, unable or unwilling to disabuse themselves of the animosity they felt toward the zoot suit wearing Mexican Americans, all of whom were called hoodlum and criminals.

“On the evening of Monday, May 30, 1943 about a dozen sailors and soldiers were walking on a downtown street. After spotting a group of young Mexican American women on the opposite side of the street, the sailors and soldiers changed direction and headed their way. Between the military men and the young women stood a group of young men in zoot suits. As the two groups passed each other, Sailor Joe Dacy Coleman, fearing he was about to be attacked, grabbed the arm of one of the zoot-suited young men. Coleman's move proved to be a big mistake. Coleman was almost immediately struck on the head from behind and fell to the ground, unconscious.

"Other young civilians pounced on the sailors with rocks, bottles and fists. After the ferocious attack, the sailors managed to escape and carry Coleman to the safety of the Naval Armory. "The fracas lasted little more than a few minutes, but the shock reverberated for days," wrote historian Eduardo Pagán. ‘The details of the fight grew larger and more distorted in each re-telling of the story’. It wasn’t long before sailors organized a retaliatory strike against zoot-suiters.”


The rioting lasted a week. On June 7, a local paper wrote and printed a how- to- guide for soldiers and White citizens to follow if they decided to undress a zoot suiters in public, which was the ultimate humiliation. They were instructed to rip up or burn the zoot suits on the street.  A riot ready crowd of hundreds gathered in downtown L. A. The crowd divided up, some plodding toward Watts, an African American neighborhood, and some headed to East of L.A. where Mexican American resided. Uniformed police officers were part of the melee.
The police made arrests but the majority of those arrested were Mexican Americans.

“After several days of rioting and assaults by servicemen, more than 150 had been injured and the police had arrested and charged more than 500 Latino youth for rioting or vagrancy, many themselves the victims. ‘Zoot Suiters Learn Lesson in Fight with Servicemen’ declared the Los Angeles Times. The Los Angeles City Council issued an ordinance banning the wearing of zoot suits. ‘The zoot suit has become a badge of hoodlumism,’ explained Councilman Norris Nelson. 'We prohibit nudism by an ordinance and if we can arrest people for being under-dressed, we can do so for being over-dressed.

“Finally, on June 7, military authorities did what civil authorities would not. Navy and Army commanders sought to get control of their men by ordering that the City of Los Angeles be declared off-limits to military personnel. Nonetheless, the official Navy position was that their sailors were acting in "self-defense against the rowdy element. Although the police accompanied the caravan of rioting servicemen, police orders were to let the shore patrol and military police deal with the military men.” Los Angeles Almanac 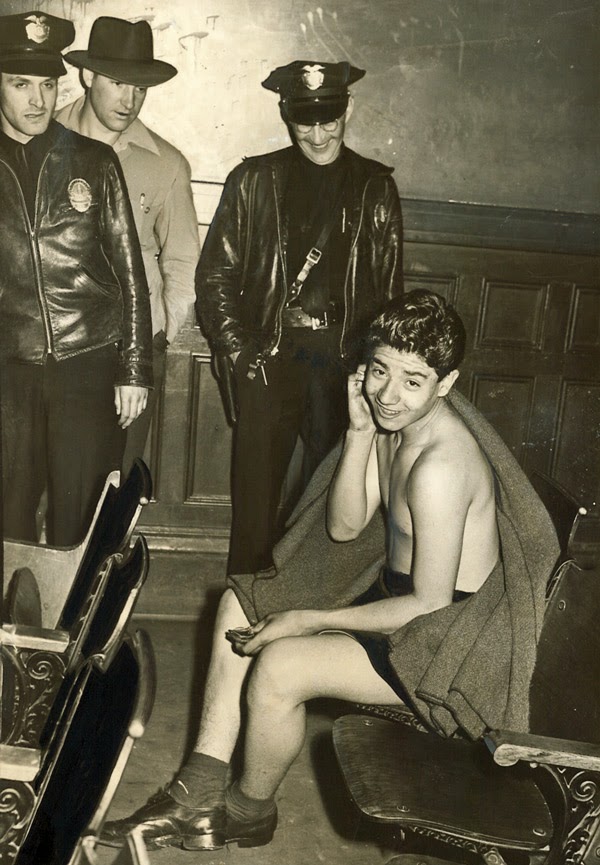 “Al Waxman, editor of the Eastside Journal, a small Jewish newspaper, witnessed the chaos. He describes a "mass of humanity locked in violent struggle, arms swinging, legs kicking, shrieking with anger." The police were arresting dozens of young Mexican Americans. "Why am I being arrested?" one of them asked. The response was a savage clubbing with a nightstick. Although the boy fell to the sidewalk unconscious, he was kicked in the face by police.” The American Experience, PBS


A special committee formed by the governor of L. A. analyzed the riots and concluded that race was not a factor. No one had discriminated against the zoot suiters, the report concluded.

(right photo) Mexican American teen held at police station, stripped town to his underwear. One cop looks amused by the smiling teen.
Posted by dorothy charles banks at 9:15 PM No comments: Links to this post